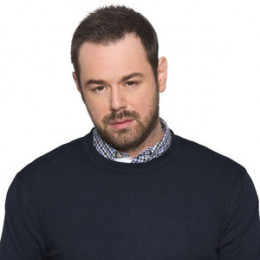 Danny Dyer is an English actor, known for playing the role of Malcolm, Michelle's stepfather in the television series, Skins. He also played the role of Mick Carter in the BBC soap opera EastEnders. Dyer is a married man and has three children; Dani, Sunnie, & Arty, with his wife.

Danny Dyer, at the age of sixteen, auditioned for the part of Martin Fletcher on TV series Prime Suspect 3. He then landed an opportunity to appear in the television series including Cadfael, Loved Up, Soldier Soldier, A Touch of Frost, etc.

Dyer has also performed in the commercial for Coca-Cola & has appeared in the drama Second Generation.

He is a lifelong football fan and was the chairman of the Kent League's Greenwich Borough. Besides, he also presented The Real Football Factories and its spinoff. He has also appeared in Danny Dyer’s Deadliest Men and is known for his role in East Enders.

Danny Dyer married his long-time girlfriend Joanne Mason on September 3, 2016, after dating since 1992. They got engaged back in 2015. Dyer has three children; Dani, Sunnie, & Arty with wife Mason.

Dyer, along with his wife and three children, resides in Debden, Epping Forest Essex. The duo is getting along pretty well in their personal lives and unlike what some sources say, they are not getting a divorce anytime soon.

Danny Dyer's estimated net worth is around $500 thousand accumulated primarily from his acting venture. In addition to being an actor, he is also a businessman and earns a great deal of salary from both of his professions.

Danny Dyer married his long-time girlfriend Joanne Mason on September 3, 2016, after being in a relationship since 1992.