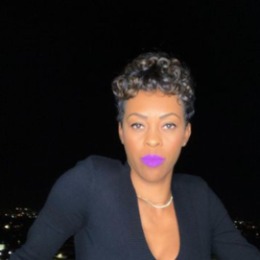 Daphnique Springs is a popular Actress and comedian who's shown up in various TV shows and films and performed live around the nation. Springs rose to fame after winning the 'She-Devil event' in 2015. She is also the winner of the American Black Film Festival 'Comedy Wings Competition' in 2016, supported by HBO.

Is Daphnique Springs Married? Who's Her Husband?

Daphnique Springs loves to keep her personal life private from the media despite being a public figure. Therefore, she has not disclosed any information about her boyfriend or husband till today.

Springs is close to most of her male colleagues and also uploads moments spent with male partners (friends). Hence, whether she is in a relationship, married, or has any children is unclear. However, Daphnique was rumored to be dating one of her friends, Youtuber Garrick Dixon. 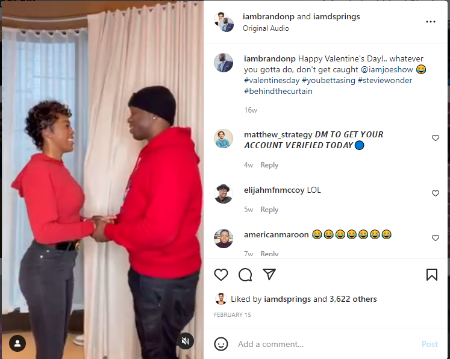 On February 14, 2022, Jodell "Joe Show" Lewis proposed behind the curtains to his co-star Daphnique Springs on Valentine's Day. Although Daphnique looks great standing aside Joe with red outfits, they are not real-life partners.

The 35-year-old television personality has always been serious about her diet and daily life routine. She visits the gym and goes for swimming to maintain her body structure. Compared to Daphnique's previous posts, she has somehow burned calories to look stunning on a television set. 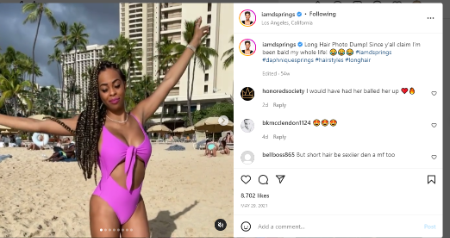 Moreover, People have always criticized Springs's masculine kind of looks and bald hair. So to prove her fans wrong, the Florida native uploaded a "long hair photo dump" on May 29, 2021, claiming she had long, beautiful hair in the real 2000s.

Daphnique Springs's Net worth and Career

As of 2022, Daphnique Springs has an estimated net worth of $1.5 million. Her fruitful career as a comedian, Actress, and writer has been her essential source of income.

She has been able to construct a great fortune through her different pay sources, such as comedy life and tours. She has toured with Emmy-winning Katt Williams and Cedric, the entertainer. 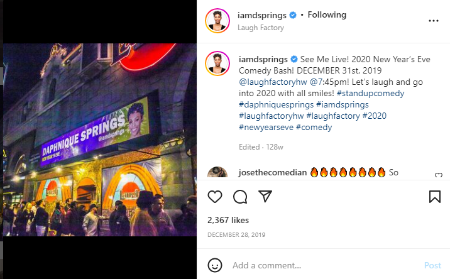 Springs was included on Laughs on Fox and recently starred on HBO All Def Comedy in her first Televisionstandupp appearance. Springs started her career as a standup comedian in October 2010. She had performed standup comedy at distinctive comedy clubs like Flappers, Ice House, The Comedy Store, Improv, and Laugh Factory.

Daphnique Springs has been featured in various standups, TV shows and movies. She has starred in How I Met Your Mother (CBS), The Comedy Get Down (BET), and Jimmy Kimmel Live (ABC). The technique featured Martin Lawrence and toured with Katt Williams on his "Born Again…Again Tour".

Check out the clip of Daphnique Springs's comedy clip on her Youtube channel!

She plays on Amazon's JFL New Face Documentary, which is yet to be released. She lately shot her first Late Night Stand Up appearance for 'Last Call With Carson Daly' set to make a big appearance in November 2018. She also appeared on TV shows 'All Def Comedy and 'Inside Jokes.' "Laughter is Healing', and challenged in the comedy competition show 'Bring the Funny.'

All in all, Daphnique is set to be cast in the upcoming standup comedy series 'This Joka. Her brief movie credits are: Coach Ricardo (2011), Photograph (2016), and Why She Keep Scratchin? (2021) alongside Gerald 'Slink' Johnson. Daphnique is a host of the podcast 'Unapologetically Daphnique', propelled on March 24, 2021.