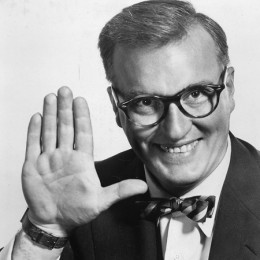 David Cunningham Garroway commonly known as "Dave Garroway" was a television presenter and anchor of NBC's Today. He had received two Stars on the Hollywood Walk of Fame for Television at 6264 Hollywood Boulevard and for Radio at 6355 Hollywood Boulevard. He studied at University City High School and has earned a degree in abnormal psychology from Washington University located in St. Louis.

Through out his life, he was married thrice and had two children of his own and one was adopted. His first marriage broke up just in one year and the couple has a daughter from their marriage. Afterwards, he married an actress with whom he has two sons, one of his own and one adopted from his wife's first marriage. His second wife died of drug overdose. Lastly he was married to an astronomer. He died at the age of 69, committing suicide by the gunshot.

She is the first wife of Dave. From their one years of marriage they have a beautiful daughter.

She was the second wife of Dave, who died of Drug overdose. They were never divorced.

She is the third wife of Dave who by profession is an Astronomer. The couple had been together till the last breathe of Dave.

She is the first child of Dave who was born healthy. Much information on her is not available.

He is the second child of Dave who was born safe and sound.

He is the son of Wilde from her first marriage, who later was adopted by Dave.