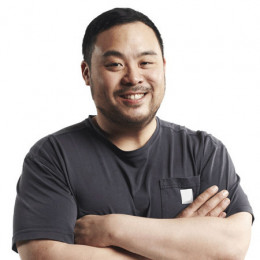 An American restaurateur, author, and television personality who is well known as a chef of New American cuisine and founder of the Momofuku restaurant group. When he was young he was an avid fan of golf and he himself was very competitive golfer who participated in a number of junior tournaments. After graduation he started teaching English in Japan. Later he left the job and worked at Mercer Kitchen in Manhattan. In 2004, he opened his own Momofuku Noodle Bar in the East Village. Since then he has opened Michelin star-rated restaurants in New York, Sydney and Toronto. He has already appeared in popular Food shows like All Stars, MasterChef Australia, and The Mind of a Chef.

Talking about his personal life he has not married yet. Though he has already reached 38 years, he is still a bachelor. According to him most of his friends are all married and are settled but he still thinks that he is still 18 years old kid. According to him, home is place for him to order Chinese food, sharpen knives and shower. It seems like he really enjoys to stay single. May be he will plan to get married soon in coming future.