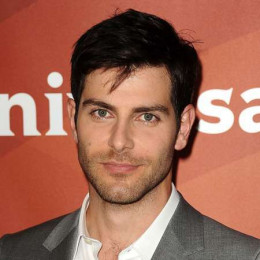 An American actor who is better known for his role as Nick Burkhardt on the series, Grimm. He is son to Mary and David Giuntoli. He is of Italian descent. According to him, when he was small, he was not so much athletic. In 1988, he graduated from St. Louis University High School. From very young age he wanted to pursue his career in entertainment industry. In 2003 he was discovered by talent scouts for MTV and he was casted in seventh season of Real World/Road Rules Challenge. He has made guest appearance in several TV shows like Grey's Anatomy, Ghost Whisperer, Privileged, Without a Trace, Veronica Mars and Cold Case.

This handsome hunk has not married yet. Though he has not married yet currently he is off the market. He is dating his gorgeous blonde girlfriend who is also an actress. Prior of being in relationship with her, he has dated a model. He was also rumored of dating gorgeous Mary-Beth Decker but the rumor was all hoax. Talking about his sexuality, he is not a gay at all.