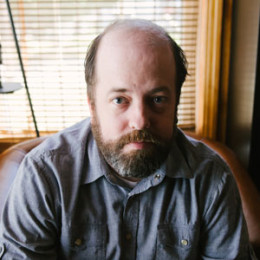 The American writer and essayist, David Hopkins has published several popular books to date. His popular works includes Karma Incorporated and Emily Edison. He gained wide recognition for publishing a comic book, an adaption of Antigone, with frequent collaborator artist Tom Kurzanski. Currently, Hopkins writes a regular comic feature along with artist Paul Milligan for D Magazine called Souvenir of Dallas. He is the co-producer and co-host of Fanboy Radio’s Indie Show. He also serves as a regular comic feature writer of D Magazine named Souvenir of Dallas along with artist Paul Milligan. He has written many comic books and graphic novels in a variety of categories.

Hopkins is married to his girlfriend who is an artist and designer. They are proud parents of two daughters and the family lives in Arlington, Texas.

Born on May 1, 1977, in the United States of America, David Hopkins belongs to American nationality and ethnicity wise, he is a White American.

Hopkins graduated in 2002. The following year, he started his writing career when actress Aja Jones offered him to write a stage play for her theatre troupe to perform at the University of Texas, Arlington.

Hopkins began writing comics and wrote a five-issue series, The Insight during his first year. In June 2003, he wrote a fictional story about three astronaut families living in Houston, a 144-page graphic novel Astronaut Dad. The novel was published by Silent Devil Productions.

Hopkins published a mini-comic, Some Other Day with artist Brian Kelly. His first published work was a short story in Viper Comics named [email protected]: Rough Cut (2004). The comic’s creator, Josh Howard also invited him to contribute to this anthology.

Hopkins wrote Emily Edison, which was illustrated by Brock Rizy and published by Viper Comics in 2006. He tutored English and Creative Writing at Martin High School in Arlington, Texas for more than a decade. He also served as a writing coach for interscholastic competitions for 12 years.

One of his most famous essays is How a TV Sitcom Triggered the Downfall of Western Civilization. The essay was a Medium.com editor’s pick with over three million views. He is also well known as Best Local Comic Book Writer.

Hopkins serves as a contributor to the Smart Pop Series fro, BenBella Books. He is also the co-host and co-producer of Fanboy Radio’s Indie Show.

David Hopkins’ estimated net worth is over $1.5 million at present, according to some online sources. He has earned huge amount of net worth through his writing career.

A comic book writer, normally receives nearly $67,746 annually, as per the online sources. Therefore, Hopkins’ salary can be close to the figure.

Hopkins' published book, Emily Edison 1 has been priced $113.86 for Library Binding and $6 for Paperback Binding.

David Hopkins is a married man and has two children. He has been married to April Hopkins, an artist, and designer for a long time. The couple exchanged vow in a private ceremony in the presence of their close friends and family members.

They are also the perfect parents of two adorable daughters, Kennedy and Greta. The relationship between them is still going strong with no divorce rumors or any extra affairs.

The pair is living happily in Arlington, along with their children and a dog named Moose.