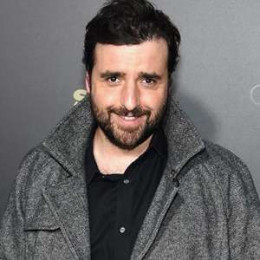 An American actor, David Krumholtz, is married to Vanessa Britting, an actress, since 2010. David was born to mother, Judy Krumholtz, a dental assistant and father Michael Krumholtz, a postal worker. He grew up in a poor Jewish family and completed his education from the New York University. David got his role on "Numbers" after following his friend to an open audition for a Broadway play.

David Krumholtz has played the role of Mr.Universe in the film "Serenity." David was awarded by Screen Actors Guild Awards for outstanding performance in a motion picture. He was diagnosed with thyroid cancer in 2011 and began a radioactive iodine treatment five months later. He became cancer free in 2012. David is married to Vanessa Britting. There are no signs of their separation till now.

David Krumholtz got married to actress Vanessa Britting on May 22, 2010 in the Plaza Hotel, New York.

The couple is blessed with a baby girl named Pemma Mae Krumholtz , who was born in 2014. She looks cute in the available pictures.