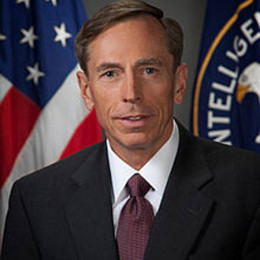 A retired American military officer and public official, David Petraeus is the son of Miriam, a librarian, and Sixtus Petraeus, a Dutch sea captain. He earned the General George C. Marshall Award as the top graduate of the U.S. Army Command and General Staff College Class of 1983. In 1981, Petraeus became aide-de-camp to the Commanding General of the 24th Infantry Division.

David Petraeus married Holly Knowlton in 1974. The couple has a daughter named Anne Petraeus and son Stephen Petraeus. He is a member of the National Security Advisory Council, U.S. Global Leadership Coalition. On 10th June 2016, Petraeus and Mark Kelly, a retired NASA astronaut, announced the creation of the gun control group 'Veterans Coalition for Common Sense'. Petraeus retired from the U.S. Army on 31st August 2011.

David Petraeus married Holly Knowlton in 1974 and have two children, a son and a daughter. Petraeus retired from the U.S. Army on 31st August 2011.