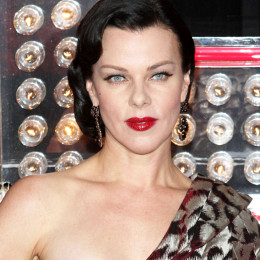 Deborah Mazar is an American actress as well as a television personality. She is known for her role in a series named Cooking Channel, Jersey Girl-type roles, HBO series. Harry Mazar is her father and her mother is Nancy Mazar. At her teenage she had worked in a jewelry shop as well as a dental assistant at a club. She had attended Manhattan School. She was a beautician before entering to the acting career.

Her career had begun as a hip hop b-girl in New York. She had also appeared in five music videos of Madonna. She had participated in the 9th season of Dancing with the Stars. In early 2011 she had started doing Cooking Channel, a television series. She had also acted on many films including Nowhere, A Beautiful Life etc. Her estimated net worth is $ 7.5 million USD.

Debi Mazar was born Deborah Mazar on August 13, 1964, in Jamaica, Queens, New York City, New York, U.S. Nationality-wise, she is American and belongs to the White-American ethnicity. She is born daughter to Nancy and Harry Mazar.

Mazar parents annulled their marriage soon after her birth and she spent her most of the child with her mother. Later, she went to Long Island and lived with her godparents.

Debi Mazar worked at Danceteria and during that time she met Madonna who hired Mazar for her makeup. She started her career as a hip hop b-girl in New York City. In 1984, she debuted on the TV with hip-hop TV show, Graffiti Rock. She featured in the five of Madonna's music videos including "Papa Don't Preach", "True Blue" (both 1986), "Justify My Love" (1990), "Deeper and Deeper" (1992) and "Music" (2000).

Mazar featured in the  2nd season of ABC's The $100,000 Pyramid reboot where she helped her contestant get 7 clues in only 15 seconds causing host Michael Strahan to say,

"I think that's the quickest round we've ever had, 15 seconds!"

Debi Mazar is happily married to Gabriele Corcos. The duo tied the knot on March 16, 2002, in a ceremony officiated by Ellen Burstyn. The couple is blessed with two adorable daughters,  Giulia Mazar and Evelina Mazar.

Currently, the couple lives in Brooklyn, York along with his two daughters. She has several dogs, one of her dog, Delores was prominently featured in the first season of her show Extra Virgin, until his death in 2011.

Mazar and her husband, Corcos started TV series on the Cooking Channel, Extra Virgin Americana where they travel the U.S., road trip style, with their children and family friend searching for great food.

She had married to a chief in 2002. Though she had dated many guys but now she is happily married and has no complication in her relationship.

She has two children from her husband. Her first child is a daughter and her name is Evelina Maria.

Her second child is also a daughter. She was born on 2006 and her name is Giulia Isabel.