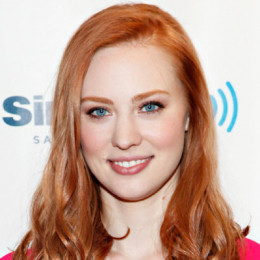 An American actress Deborah Ann Woll is the daughter of an architect father by his profession and her mother Cathy Woll was a teacher. Deborah is best known for her role as Jessica Hamby on HBO's True Blood. She has suffered from Celiac disease since she was an infant. As a child, she was fond of acting, dancing and playing piano. She is of Irish and German descent. She gained her high school education from Packer Collegiate Institute.

She has a boyfriend, EJ Scott who has been suffering from an incurable disease "Choroideremia" that is going to turn him completely blind. She has been living with him for five years. She is an unmarried actress.

She is inspired by her boyfriend to live happily in her difficult situations and obstacles. Anyway, she has close relationship with him and she has been caring him well. To be in touch we can follow her on twitter @Deboranannwell.

She stated that Scott's bravery fighting his disability inspired her to fight with celiac disease, an autoimmune disorder.

Me and my man @ejscott1106 at a @netflix event last night. Good luck at the SAG Awards, Netflix!

She first met her future boyfriend after she trawled through a pile of match.com profiles. She fell in love with the guy on her first date.

Talking about his disease, she said,

'It hurts knowing it will only get worse.'

"He was very honest. I knew about his visual impairment before I met him. But it was a very personal decision."

"People born like that have to decide when and where to tell people. But when I read what he was goring through initially I was really impressed with his courage."

There is no cure for CHM as the victim eventually go blind with the passage of time.

Woll was born on 7 February 1985 in New York City, New York. Her mother, Cathy Woll is a teacher and her father works as an architect.

She belongs to Irish and German descent.

She studied at the Packer Collegiate Institute for high school. She completed Bachelor of Fine Arts from USC School of Dramatic Arts at the University of Southern California.