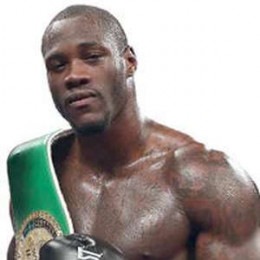 Deontay Leshun Wilder is a professional boxer, who has won the WBC heavyweight champion medal since 2015. Wilder started his career since 2008. In March 2015, he knocked out former WBO heavyweight champion, Malik Scott in the first round and held the title since then. Walder made his third defense in January 2016, against Artur Szpilka and forth denfence on July 16, 2016 at the Legacy Arena, Birmingham, Alabama. He has broken his right hand and tore his bicep while he was fighting.

Wilder, who previously dreamt of being an American football or basketball player is married to Jessica Scales-Wilder since 2009. The couple is blessed with four children; two sons, Dereon and Deontay Jr. and two daughters, Naieya and Ava.

Wilder was once arrested in Las Vegas for domestic battery by strangulation, which is a Class B or Class C felony on 4 May 2013. However, he and the victim have spoken about this and the victim has accepted his apology. According to Clark County, Nevada records, Wilder was cleared in the matter.

Deontay Wilder was born on October 22, 1985, in the USA. He started boxing in October 2005 after entering Skyy Boxing Gym in Northport, Alabama. He defeated the world champion Isiah Thomas at the Golden Gloves.

He debuted at the age of 23 at the Vanderbilt University Memorial Gymnasium in Nashville, Tennessee. He won his first title in professional boxing at the Memorial Sports Arena in Los Angeles, on December 15, 2012.

Deontay Wilder is happily engaged to Telli Swift. The duo shares a baby born in February 2018. Previously, he was married to Jessica Scale since 2009. The duo shares four children, two sons, and two daughters. He was just 19 when he became a father for the first time.

He married his longtime girlfriend in 2009. The couple is blessed with four children, two sons and two daughters.

She was born to become the lovely daughter of .lovely couple, Deontay Wilder and Jessica Scales-Wilder.

He is the first son of this couple .He is a lovely and handsome child and he was born in a healthy way.

Deontay Jr. is named after his e second son of father and is the youngest and the second son of Deontay Wilder and Jessica Scales-Wilder. He is often seen with his parents in public places along with other siblings.