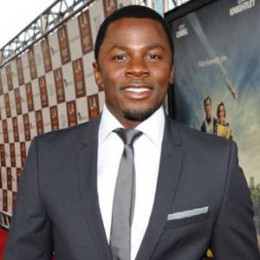 An American actor, Derek Luke is famous for his role in Antwone Fisher with $23.4 million box office collection. He now is a successful actor but the story behind the career is really painful. Derek did not enjoy much stuff during his childhood. He is married to Sophia Luke with a baby girl. Due to his hard work and dedications, he has won various awards as well.

Derek was born on 24th April 1974 in Jersey City, New Jersey. He was born to mother, Majorie Dixon (a pianist) and father, Maurice Luke (a former actor). Derek is from distinct descent as his father is from Guyana and mother from Nigerian descent. He grew up with two siblings Maurice Luke Jr. (brother) and Daniel Luke (brother). When Derek was in grade 3, his parent divorced, and his mother raised them.

Derek Luke as a freshman studied in Linden High School. After that, he joined Henry Snyder High School and graduated in 1993.

Just to take acting classes, he did various odd jobs like- selling fragrance, ushering and working at Sony Pictures gift shop to pay rent. He was too determined to be an actor so he took acting classes at night and auditioned during the daytime.

Derek debuted from a small role as a delivery boy in the TV series named, King of Queens in 1999. Again in 2001, he played a role in a comedy series, Moesha. Later in 2002, he landed the role of Antwone Fisher that had $23.4 million box office collection.  The director of the movie Denzel Washigton himself went to the store where Derek worked to give him the good news. Coincidentally the real Antwone Fisher was in the store buying a t-shirt.

After he proved his versatility, Luke signed for the movie, Friday Might Lights as a high school football player in 2004 with $62 million collections. Later on, in 2006 he got a chance to work opposite to Tim Robbins, and in 2008, he worked in a romantic comedy movie named, Definitely, Maybe.

He again acted in a comedy film, Madea Goes to Jail and other various movies like- The First Avenger, TNT's Hawthrone, Gregory Thomas in The Americans, Silla Be Dibba in History's remake of the miniseries Roots.

The actor, Luke won various awards- Best Male Lead in the big- screen debut by Independent Spirit Award in 2002 and Breakthrough Actor for Glory Road by Hollywood Film Awards in 2006.

took his gorgeous wife onstage with him and handed the award for the best actor which he had won to his lady in 2003. It showed the unconditional love between the couple. They have a baby child whose name is not revealed to the media. After years of marriage, they still share a happy life together.

Luke has a net worth of $5 million. He is living a high profile life with his family.

in 1998, Derek Luke and Sophia-Adella Hernandez got married. They share unconditional love with each other and have a baby girl.

Sophia-Adella Hernandez and Derek Luke has a baby girl but they kept their baby girl far from the media.