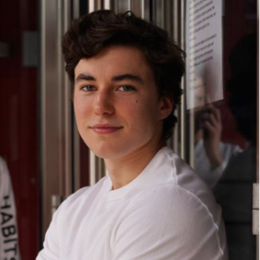 Devin Caherly is a famous social media star best known for his lip-sync and comedy videos with the help of which he accumulated over 2.6 million followers to his @devincaherly account. Caherly indeed won the hearts of millions through collaborating videos with girlfriend Tatayanna, aka Tati.

Devin Caherly, an internet sensation, is currently enjoying his romantic relationship with girlfriend Tatayanna Mitchell. Caherly has been collaborating on TikTok videos with his partner for the past few months.

The two met in real life for the first time some weeks or months ago. Tati made a debut on Devin's Instagram on July 5, 2020. That was the moment when Devin proposed the Detroit, Michigan born fellow TikTok star getting down on one knee. 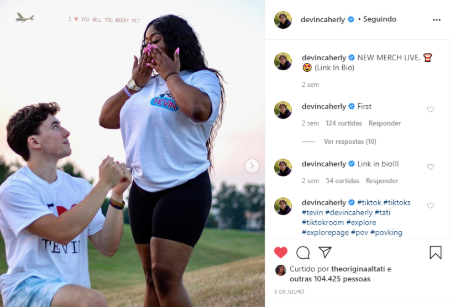 In the snapshot shared by Caherly, the duo wore "Tevin" printed white t-shirts. On the other picture, you can clearly see Devin holding a flower bouquet next to Tatayanna, posing for a selfie.

Despite two years of age differences, Devin and Tati flaunt amazing chemistry and has strong bonding. Before July, neither of the pair spotted together on PDA or social media profile.

Caherly made millions from his job as a YouTuber and TikTok star. He uploaded the first video via YouTube on August 4, 2014. To date, Devin earned 609,836 views and 44.6k subscribers on his self titled YouTube channel "Devin Caherly."

The 19-year-old star's primary source of wealth is career as a YouTube and TikTok star but collects huge revenue from ads and endorsements as well. He now runs an official Merch store where he sells "Tevin" printed T-shirts, Hoodie, Sweatshirt, iPhone Case, Tank Top. The price of each item ranges from$22.74 to $44.99.

Caherly's lover Tati made a TikTok duet featuring Charli D'Amelio while starting her career. Like Devin, Tati also has a YouTube channel titled "Therealtati" where she uploaded food review and mukbang related content.

Devin Caherly was born as Devin Patrick Caherly on March 17, 2001, in the suburbs of the United States under birth sign Pisces. Deven's father, Shay Caherly, is a commodity trader and mother, Lara Caherly, owner of Kinderprep in Westfield, NJ. 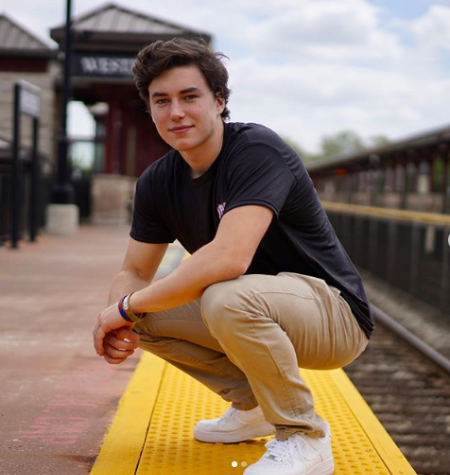 Caherly holds an American nationality and belongs to white ethnicity. Caherly played soccer for his high school team. He has a brother named Jack, who is a total replica of Devin. Jack has appeared on his @devinacaherly Instagram account. Caherly has a sister named Tess. Devin is available on social networking sites like Instagram, Twitter, and Snapchat.

Be sure to check out Marriedwiki.com for celebrity biographies and articles.