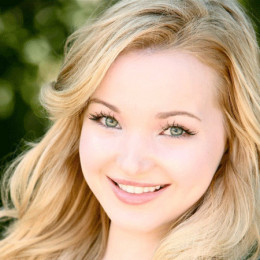 Dove Olivia Cameron is an actress and singer, well known for playing a dual role in the Disney Channel sitcom Liv and Maddie and starring in the movie Cloud 9 as Kayla Morgan. She was born to Philip Alan Hosterman and Bonnie Wallace, who encouraged her to pursue her career in acting. At the age of eight, she started acting in local community productions.

Moving on to her personal life, she hasn't married anyone yet and is too young to have children. Currently, she is in a relationship with an actor with whom she is spotted quite often. They have a good bonding and mutual understanding so they probably are looking forward to being each other's life, partner. Before all this, she was never spotted with a guy who can be assumed as her boyfriend.

Dove Cameron was born as Chloe Celeste Hosterman on January 15, 1996, in Seattle Washington. She is the daughter of Philip Alan Hosterman and Bonnie Wallace but later her parents got divorced.

Cameron grew up in Bainbridge Island, Washington with her older sister, Claire Hosterman. Nationality wise she is an American and she is of Scottish and French descent. She is fluent in French.

Cameron attends Sakai Intermediate School. She began acting since the age of 8 in community theater at Bainbridge Performing Arts.

When she was 14 her family moved to Los Angeles where she got a chance to sang in Burbank High School's National Championship Show Choir.

She is the victim of bullying through her entire school experience starting in grade fifth. Though her school days were not so good, she never loses hope on herself.

Dove professionally starts her career in 2012 as she was cast in a new Disney Channel Original Series, Bits, and Pieces which later retooled into Liv and Maddie. She portrays the character of Alanna in the series.

On August 27, 2013, she released the cover song which originally sang by Imagine Dragons as a promotional single. Cameron appeared in the television film named  Descendants which viewed by 6.6 million people.

In 2015, Cameron and Ryan McCartan formed a band called The Girl and the Dreamcatcher. She reprised her role as Mal in Descendants 2. On May 15, 2017, it was announced that Dove was cast in Mamma Mia! planned for July 2017.

Cameron is in a romantic relationship with her boyfriend, Thomas Doherty since February 2017. The duo often posts their pictures on their Instagram which clearly shown their love for one another. Despite that, the duo never failed to express their love in public too.

Prior to Thomas, Dove was dated actor and singer Ryan McCartan in 2013. They even announced their engagement on April 14, 2016, but due to some personal issue, the couple called it off in October 2016.

Cameron has earned a quite impressive net worth within short period of her career around $3 million. Besides this, she was paid handsomely for her work on television and films.