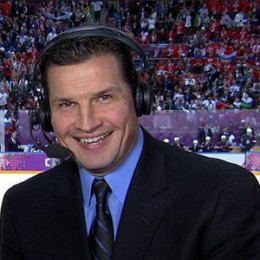 Edward Walter "Eddie" Olczyk Jr. is an American former professional hockey player and head coach from the United States. He attended Brother Rice Catholic High School. His amateur career started from the early age but his professional career started only from 1984 when he was selected by the Chicago Blackhawks. He scored his first NHL goal Vs Detroit Red Wings on 11th October 1984. He currently serves as a television color commentator for NHL on NBC and Chicago Blackhawks games on Comcast SportsNet Chicago.

Talking about his personal life, he is a married man. He married to Diana Olczyk. The couple has four children, three sons and, one daughter. His two sons are also a hockey player. His one son Nick plays from south shore Kings and, Tom plays for Penn State Nittany Lion. Since they are supportive personally and professionally, there are no any rumors about the couple divorce. He is living happily with his wife and four children.

He married his girlfriend Diana and are together parents of four children. They have come a long way in their relationship and are the most happy couple ever.

He is the first son to this family.

He is the second son the couple is blessed with. Tom is also a hockey player and plays for Penn State Nittany Lion.

He is the third son the couple is blessed with and is also a hockey player. He plays from south shore Kings

She is the only daughter to this couple.