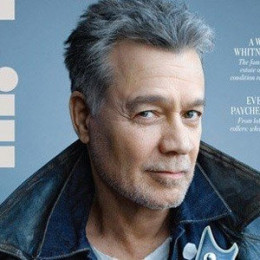 Eddie Van Halen is a Dutch-American musician, songwriter and producer, He is best known as the as the lead guitarist, occasional keyboardlist and co-founder of the hard rock band Van Halen. Halen is considered to be one of the world’s greatest guitarist, and one of the most influential rock guitarist of the 20th century. He is born to Dutch father, Jan van Halen and Indonesian-born Eurasian mother, Eugenia van Halen.He has an older brother, Alex, who was also in the same band and used to play drum.

Eddie was married to actress Valerie Bertinelli, and they had a son Wolfgang who was born in 1990. This couple announced their separation in 2002 and they divorced four year later. The reasons for the end of their marriage is extra martial affair and consumption of drugs by Eddie. Both of them were cheating on each other and it’s not sure who started it first, but Eddie claims that it was Valeriewho cheated first. After their divorce, Van Halen married his girlfriend of three years Janie Liszewski and are still together.

Eddie was married to American actress Valerie. Afters spending 20 years together, they decided to end their marriage. She has a son with him. Currently Valerie is married to her long term boyfriend Tom Vitale, whom she has begun a relationship within 2004.

Eddie after his divorce married his girlfriend Janie.They got engaged in August 4, 2008 and a year later tied knot. They do not have any children till now.

Wolfgang is the only of Eddie. He is an American musician and is the bassist for Van Halen, having replaced Michael Anthony in 2006. He is also the bassist for the heavy metal band Tremonti.