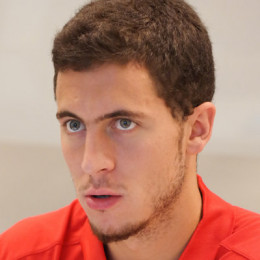 Hazard is a professional football player who is currently playing for the English club side Chelsea and in the Belgium national football team as an attacking midfielder, but he can play as a winger as well. He wears jersey number 10. He is very well known for his creativity, pace and technical abilities in the game. He started his youth career at Royal Stade Brainois and made his professional debut with the French club Lille in 2007. Eden is happily married to his longtime girlfriend. The husband and wife are parents of three children.

Eden Hazard was born Eden Michael Hazard on January 7, 1991, in La Louvière. He was raised in Braine-le-Comte. His parents Carine Hazard and Thierry Hazard both were football players. His mother stopped playing when she was three months pregnant with Eden.

Hazard is the youngest child and has three brothers Thorgan Hazard, Kylian Hazard, and Ethan Hazard. All of them are football players.

Eden Hazard began his football career after playing for hometown club 'Royal Stade Brainois' at the age of four. He joined 'Lille' in 2005 and spent two years developing in the club's local sports school, because of its youth academy. On 28th May 2007, he signed his first professional contract to 'Lille' for three years.

For the 2008 to 2009 season, after playing with the number 33 shirt in his debut season Eden Hazard was given the 26 number shirt. He was also promoted to the senior team permanently by a manager named Rudi Garcia. After the season, Eden was named as the National Union of Professional Footballers (UNFP) Young Player of the Year.

Hazard began the 2009 to 2010 season on a positive note by scoring in Lille's first competitive match of the season. On 22nd October, he scored 3–0 victories over Italian club named 'Genoa' in the 84th minute after entering as a substitute ten minutes prior.

In 2010 to 2011 campaign Eden Hazard began as a starter featuring in Lille's first six league matches of the season, as well as matches in the UEFA Europa League also honors with a place in the organization's Team of the Year for the second consecutive season.

Ahead of the 2011 to 2012 season, Eden Hazard switched to the number 10 shirt. On 28th April he was nominated for the UNFP Player of the Year award. Two weeks later, he was awarded the prestigious honor of Olivier Giroud and Younes Belhanda. On 12th August 2012, Eden Hazard made his competitive debut for Chelsea in the 2012 'FA Community Shield' against Manchester City, ended in a 3–2 defeat. 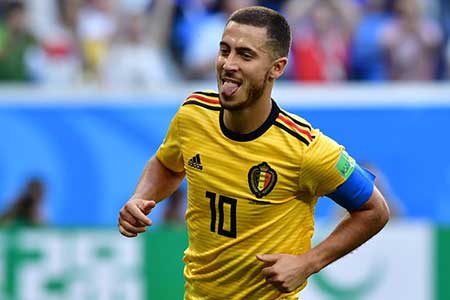 One of Chelsea's first games of the season was against Bayern Munich in the 2013 UEFA Super Cup, where Eden Hazard played a vital role in the buildup to the first goal and also scored the second, but went to 5–4 defeat in the penalty shoot-out.

PFA Young Player of the Year

Hazard faced a difficult start to the 2015 to 2016 season, after missing a penalty in the Champions League group stage against 'Maccabi Tel Aviv'. On 11th May 2016, he scored his fourth and final goal of the season against 'Liverpool', although Chelsea was unable to hold onto the lead.

On 15th August 2016, on Chelsea's opening Premier League match of the season, Eden Hazard scored a penalty in a 2–1 win over West Ham United. Similarly, on 26th December 2016, he led the Blues to their twelfth consecutive league victory, a new club record in the 3–0 victory over Bournemouth.

The amazing Hazard this season scored 16 goals and provided five assists to help Chelsea win the Premier League title. He was also named PFA Team of the Year on 20 April 2017. It was the fourth time in his five seasons for Chelsea.

There were rumors flying around about Eden transferring to the Spanish giants Real Madrid. But he addressed the rumors in an interview with Chelsea's magazine saying that he would like to win the EPL title next year too and also win the Player of the Year.

Hazard played for many Belgian national youth teams including the under-17 and under-19 teams. He made nine appearances in the Red Devils' successful 2014 World Cup qualification campaign, scoring twice. Due to the absence of 'Kompany', he was named the captain of Belgium for the UEFA Euro 2016 finals. 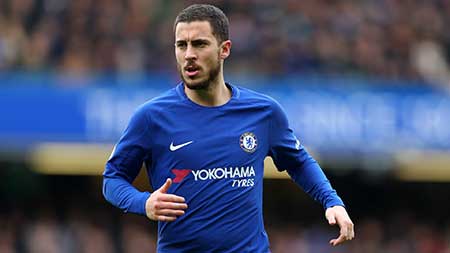 Eden Hazard primarily plays as either an attacking midfielder or a winger and credited as being "possibly the outstanding talent in Europe right now".

In 2012, Eden Hazard signed a sponsorship with 'Nike, 'American sportswear and equipment supplier named. He also appeared in an advertisement for the Nike Green Speed II alongside Mario Gotze. In October 2011, Eden Hazard earned 76 caps.

He is also a member of the Belgian squad which reached the quarter-finals of the 2014 FIFA World Cup and the UEFA Euro 2016. Hazard is well known as one of the stars of the Premier League and captains his national side.

Moreover, he is the Top 15 highest paid footballers of 2017. His net worth has estimated around $100 million.

Eden Hazard married his longtime girlfriend Natacha Van Honacker in 2012. The couple first met when he was fourteen years old. On 19th December 2010 French media announced that his wife had given birth to a baby boy named Yannis Hazard.

Their second son, Leo Hazard was born in February 2013 and the third son, Samy Hazard born in September 2015. Hazard is living a blissful married life with his wife and three children. 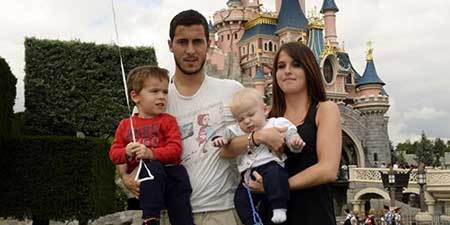 Eden Hazard with his family in Disneyland, Source: Bola.net

She is his long-time girlfriend since the young age. She is a mother of his three children. Her husband loves her very much.

He is the apple of eyes to his parents. He is very cute and adorable. French and Belgian media had published in their news about his birth.