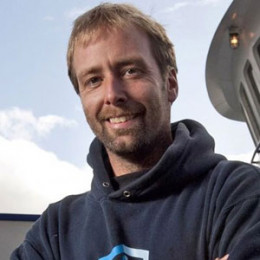 Edgar Hansen is an American television personality, well known as one of the crewmembers of the Northwestern and currently features on the TV series Deadliest Catch on the Discovery Channel.

Edger Hansen was born on 14 January 1971 in Seattle, Washington, United States. He is the son of Sverre Hansen and Snefryd Hansen and is the youngest of his siblings.

He is white in ethnicity and holds an American nationality.

Edger Hansen began fishing at a young age of eighteen, as his father and elder brother were also involved in the same field. Hansen also joined cooking in his brother sailing vessel NorthWestern.

He has also worked as a Relief Skipper and Deck Boss. While his brother Sig serves as the captain. Edgar was an expert in his work since the start.

Edger has also worked as a chief engineer for the safety of crew members ensuring the correct flow of crabs. Later, he with his brother Sig Hansen was approached by the Discovery Network to present and host the reality television series Deadliest Catch.

Edger Hansen has also appeared on After the Catch and the Tonight Show with Jay Leno and WAAF FAM Hill-Man Morning Show.

Edgar Hansen is married. Hot got married to his longtime girlfriend named Louis Hansen after having an affair. They are living their married life happily together.

Till date, there is no information regarding their divorce or any other issues in their relationship. They have three children together named Logan Hansen, Stefanie Hansen, and Erik Hansen.

Earlier this year on July, Edger Hansen was accused of sexually harassing a 16-year-old girl, now 17. The news shocked all the Deadliest Catch star. According to the report filed, he reportedly tried to quench his sexual pleasure.

For the accusation, he was also given a suspended 364 days in jail. It means he won't have to go behind bars. He was also slapped with two years probation and a $1,653, with an additional $4,800 fine suspended, court records show.

But afterward, he admitted to his wickedness and said he touched the teenage girl's genitals and asked her to do that in return. In a written statement, he acknowledged the fact, he touched the girl's private parts for sexual gratification.

The alleged assault happened on September 30 in Snohomish County, Washington. The victim, first reported the incident to a therapist.

Edger Hansen earns a good amount of money from his successful career as a television personality. His total net worth is estimated to be $700 thousand.

Do visit Marriedwiki for interesting Gossips and Biographies!!!

She was born to Edger Hansen and Louis Hansen.

He was born to Edger Hansen and Louis Hansen.

He was born to Edger hansen and Louis Hansen.