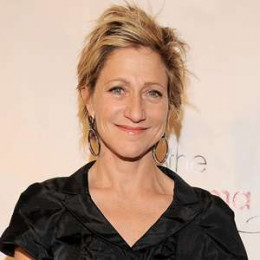 An American television, film, and stage actress, Edie Falco is currently dating with actor Bill Sage since 2009. She is known for her role as Diane Whittlesey in the HBO series “Oz”.

Besides Devlin, Edie also dated to actor Stanley Tucci in 2003 but they did not continue their relationship and they ended in 2004. Both met while working together on "Frankie and Johnny in the Claire De Lune" on Broadway. In 2009, she was in a relationship with actor Bill Sage. Falco adopted a son, Anderson, in 2005 and a daughter, Macy, in 2008.

Edie Falco holds an estimated net worth of $40 million.

Edie Falco was born on July 5, 1963, in  New York City, New York, U.S. She is the daughter of Judith Anderson, an actress, and Frank Falco, a jazz drummer.

Falco graduated from the acting program at the State University of New York at Purchase. Falco has become the spokesperson for Health Care for America Now and appeared on CNN on June 25, 2009.

She also adopted a baby girl from Florida and named her Macy. She is the second adoptive daughter of her.