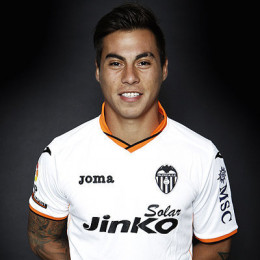 Eduardo Jesus Vargas Rojas is a Chilean professional football player. He plays mainly a forward but sometimes he also plays as winger. His father is Edward Vargas and his mother is Pamela Vargas. He had represented La Roja in 2014 FIFA World cup. From Napoli he was signed by Cipiri on loan. In Renca he had started playing in amateurs teams. From his club he had played on squad no 17.

He had made his debut in international career in 2008 form Toulon Tournament. There he had been chosen as the best winger. After that he took part in Kupa Talents Cup and there he got award for best player of the tournament. Since 2009 he had been in the first team of Chile. He is very talented and devoted towards his work.His salary is $4.2 million.