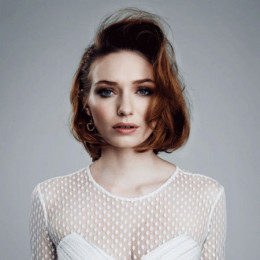 An English actress who is well known for playing in the role of Princess Isabelle in the 2013 action-adventure film, Jack the Giant Slayer. She has also starred in the movies like Alice in Wonderland and Angus, Thongs and Perfect Snogging. She is daughter to Malcolm Tomlinson, an actor and Judith Hibbert, a singer. She made her debut in acting career in 2006 through the movie named "The Illusionist", in which she played the role of Young Sophie. In 2014 she played the role of Demelza on the BBC One series Poldark.

Exploring her personal life, she has not married yet. Currently she is in relationship with her boyfriend who is also an actor. They met each other in the movie set where they were working together as co-stars. After that they fall in love with each other and started dating. Till now he is the only one she has dated so far. It seems like there is really strong bond of love between them.