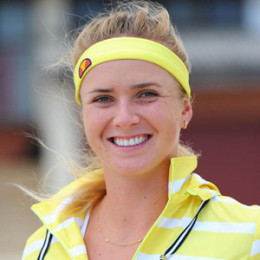 Professional Ukrainian tennis player, Elina Svitolina is known for her amazing playing style. She has won nine WTA singles titles including Premier 5-level tournaments, the Dubai Tennis Championships, and the Italian Open. In 2010, her professional tennis career was started and she is the first Ukrainian woman to break into the top 10 rankings in tennis. In 2010, her professional tennis career was started. She is in a romantic relationship with English cricket player Reece Topley.

Elina Svitolina was born as Elina Mykhaylivna Svitolina on September 12, 1994, in Odessa, Ukraine. She is the daughter of Mikhaylo Svitolin, a former wrestler and  Olena Svitolina, a former competitive draughts player.

She has an elder brother, Yulian who encouraged her to pursue her career in tennis and he was her first coach too. She started playing tennis at the age of 5 and when she was 13, she moved to Kharkiv with her family.

Elina began her professional tennis career in 2010 with junior French Open by winning the final. Later she participates in  2012 Wimbledon Championships and reached the final. The same year she was qualified for 2012 US Open and also earned WTA 125K 2012 Royal Indian Open title.

Following year, she made her journey up to semifinals in 2015 Brisbane International and she considers 2015 wasn't for her after losing the competition simultaneously. In 2016, she made her fourth WTA title and reached up to Olympic quarterfinals

Furthermore, in 2017 she won the two massive titles, the Dubai Tennis Championships, and the Italian Open. As of September 2017, she ranked the career-high ranking of world no. 3.

Currently, Elina is in a romantic relationship with her boyfriend, Reece Topley. He is a popular English cricketer who plays for Hampshire and represented England. The duo made their relationship official in 2017. Both of them belongs to the sports fraternity and that might be the reason of their togetherness.

The pair first encounter in the gym and once in an interview she shared her first experience with Reece,

“I spotted him straight away,” Svitolina says. “It wasn’t difficult. He is two meters tall and very strong. I was very focused on my training and then I saw him in the restaurant afterward.”

They are one of the popular couples in Ukariane sports field. The duo has millions of fan following from all over the world. She is quite active in social sites also.

Racket player, Svitolina has earned a decent sum of the amount but due to his secretive nature, she hasn't mentioned the exact figure of her net worth. However, she has won several titles and won an astonishing cash prize too.