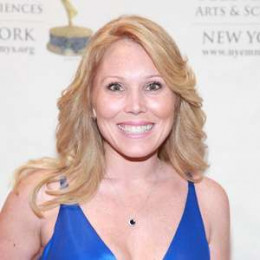 American journalist, Elizabeth Hasgagen is currently serving in News 12 Network as an anchor. In 1999, she joined the network and started working as a reporter later served as a morning show anchor. Active in the field of journalism for years, she has gathered a huge net worth and salary.

When it comes to her personal life, Elizabeth is married. She shares two children with her husband.

Elizabeth Hashagen is a married woman. She is married to husband Randy Flickr and has two children, a son, Timothy Paul and a daughter Allison Rae.

Get To Know More: Sean Hannity

Besides, Hashagen won her first Emmy Award in 2004 for her coverage of a Continuing News Story. Her six Emmy nominations in 2006 topped all other reporters and anchors around NY.

Elizabeth Hashagen has an estimated net worth of $1 million. Her major source of income is her journalism career.

Elizabeth Hashagen was born on 10th March in the United States. By nationality, she is American and is of White ethnicity/race. She grew up in Freeport.

Regarding her high schooling, she attended Holy Trinity High School and later attended university for her further studies.

Elizabeth Hashagen is a co-anchor at News 12 Long Island. She attended State University College at Cortland, the University of North London and took graduate classes at NYIT.

Heart disease affects women of all ages. Even if you spin, run, step, do yoga.. your risk isn’t eliminated. 64% of women who die suddenly of coronary heart disease had NO previous symptoms. Take a second and let this next fact sink in... Heart Disease is More Deadly than All Forms Of Cancer COMBINED So let’s #wearred and start the conversation #nationalwearredday @american_heart_association #GORedLI #longisland

Elizabeth began her career in journalism from WLNY TV-55. As a reporter for the station's LIVE at 11 Newscast, she covered a wide variety of assignments including Hillary Clinton's Senate race against Rick Lazio. Elizabeth also handled News 12's live network coverage from Ground Zero during the days after 9/11.