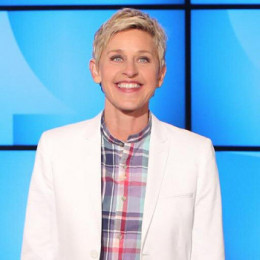 Ellen Lee DeGeneres is a well-known TV host, comedian, actress, producer and a writer known best for being the host of the hugely popular TV talk show The Ellen DeGeneres Show. She also starred in the very popular sitcom known as Ellen from 1994 to 1998 and started hosting her very own talk show since 2003. She is also known for her film roles and charitable endeavors.

Ellen is a married woman. She is an openly lesbian television personality who has dated lesbian TV stars. She has been on a total of four relationships and her last relationship is running along as a smooth marriage with no marital problems. She has been married to her longtime girlfriend for twelve years now and the couple still seems to be getting along pretty well.

Ellen from her show Ellen DeGeneres takes home around $77 million a year making her the second highest paid TV personality of 2017. Check out the video to find out who ranks number one.