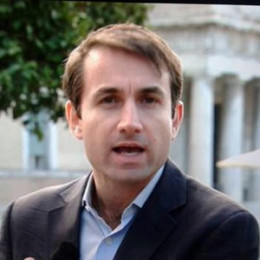 Elliott Gotkine is former Middle East Editor of Bloomberg Television. Previously, he was also the BBC's South America Correspondent, based in Buenos Aires.

Elliott Gotkine was born on 25th December 1975 in London, England. He attended the University of Nottingham, studying Geography, and passed out in the year 1998.

His career started in the year 1998, Elliot became a production runner for the London NEws Network. In 1999, from April to August, he worked as a reporter for Euromoney's International Financial Law Review.

The following year, Gotkine was Deputy Stock Market Editor for the non-defunct UK-investor until December.

He first joined the BBC in Jan 2001 as a broadcast journalist with BBC Business and also worked as a video journalist for the BBC's World Business Report program from May to August 2002.

Elliott was the BBC's Lima Correspondent from September 2002 to August 2003. During the time, he interviewed Peru's Mario Vargas Llosa who is the Noble prize-winning novelist,  which he says is the highlight of his career.

In the year 2003, he was posted to Buenos Aires, as the BBC's South America Correspondent. Elliott covered stories including Maradona's brush with death in 2004, anti government protests in Bolivia and the plight of the internally displaced in Colombia.

He joined the Bloomberg TV as a business reporter. In 2013 Feb, Gotkine took up the role of Middle-East Editor. Located in Tel-Aviv, he was the only international broadcaster in Israel focusing on company news, the technology and economy. Later in the year 2016, Elliot Gotkine left Bloomberg.

Elliott Gotkine is a married guy and also has kids, but he has chosen to keep details about his marriage, wife, and children away from media.

Elliott has earned a good amount of money from his journalism career, as his net worth is estimated to be a million dollars.