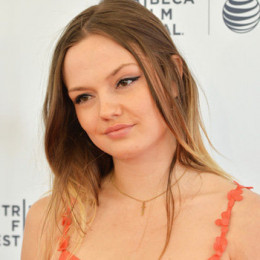 An American film and television actress Meade is known for her portrayal as Ella Blake in the science fiction series Fringe third season finale. Currently, she appears in the HBO drama, The Leftovers where she has a recurring role. Some of her film credit includes The House Is Burning, Assassination of a High School President, Back and a short movie called I Will Follow You Into the Dark.

Accounting her personal life, she is a married woman. As per the information provided by the source, she has been enjoying her martial relationship with her long time dated boyfriend who is said to be her school sweetheart. Detailed information about her marriage is unknown, as she is so conscious regarding her love life. She was rumored of dating the popular singer and rapper 50 Cent in the year 2009.

He is the one and only beloved husband of Meade, whom she knew while attending her school. Details information about their marriage is yet unknown to the media.