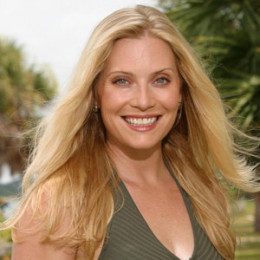 An American actress, Emily Procter is widely popular for her appearance in NBC political drama West Wing and CBS police procedural drama CSI: Miami. She had also a recurring role as Amanda Callaway in the USA Network crime drama "White Collar" in 2013.

Emily Procter Dating? Who's Her Boyfriend?

Emily Procter is in an intimate relationship with musician Paul Bryan since 2008. Other than that, the actress and her boyfriend are blessed with a baby girl.

The duo welcomed their first child, a daughter named Philippa Frances on 8th December 2010. As of late 2019, the family of three currently resides in a Spanish-style home that she decorated herself in Los Angeles, California.

The actress's pregnancy was not written into the ninth season of CSI: Miami which made her appearance on the show during the season very limited. Meanwhile, she enjoys participating in marathon and triathlon competitions. As an efficient poker player, she has taken part in at least one major celebrity poker tournament.

How Much Is Emily Procter's Net Worth?

Emily Procter's net worth is estimated to be $14 million. Her primary source of income includes her salary and earnings from her career as an actress. As she continues her endeavors, it is expected that her wealth will also continue to increase. To this date, she starred in twelve movies and sixteen Tv series.

Except for household works and her movie career, Emily has a developed taste in antiques and interior decoration. As a philanthropist, Procter serves as a keynote speaker at Spring 2019 commencement at her high school, East Carolina University and sixteen TV series to this age.

Emily Procter was born and raised in Raleigh, North Carolina. She was two years old when her parents William Procter (a general practitioner) and Barbara Procter divorced. She has an older brother named Whit Procter, who was adopted before her. Emily is a graduate of Ravenscroft School in Raleigh.

Procter was a member of Alpha Delta Pi sorority at East Carolina University. She then received her degrees in journalism and dance at East Carolina, after which she was employed as a television weather anchor at WNCT-TV in Greenville, North Carolina.

Emily Procter initially went to the drama school for two years. She acted in movies such as Leaving Las Vegas and Jerry Maguire before she graduated. In 1988, she got her first main role in the film Breast Man.

Meanwhile, Emily's breakthrough was on the TV series CSI: Miami, where she played the role of Calleigh Duquesne from 2002 to 2012.

She is the mother of one child named, Philippa Frances Bryan who was born in 2010.