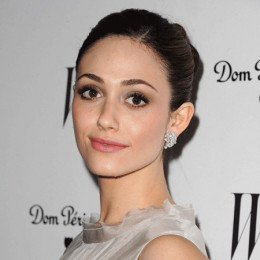 An American actress and singer-songwriter who is widely known for her role as the cool-headed Fiona in Showtime's Shameless. She is daughter to Cheryl Rossum who professionally was a corporate photographer. Her parents split up before she was even born. She did online diploma course from Stanford University's Education Program for Gifted Youth when she was 15 years old. In 1997 she debuted in acting career in soap opera As the World Turns. In 2004 she had a lead role in The Phantom of the Opera and for her performance she was even nominated for a Golden Globe Award. She has starred in popular movies like The Day After Tomorrow (2004), Poseidon (2006), Dragonball: Evolution (2009), Beautiful Creatures (2013) etc. She has been honored with many awards through out her career like Saturn Award for Best Performance by a Younger Actor, Broadcast Film Critics Association Award for Best Young Actress etc.

Exploring her personal life she was married to her boyfriend who occupationally is a music executive. Unfortunately the marriage didn't lasted even a year and the couple got divorced citing irreconcilable differences as the reason behind their split up. Beside her marriage she has dated couple of celebrities. Currently she is dating a film producer. She has not been a biological mother yet.

Professionally he is music producer. After one and half year of their marriage he filed divorce in Los Angeles.