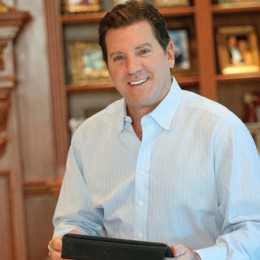 Eric Thomas Bolling is a conservative American television personality. He specializes in financial news as well as in political commentary. He also co-hosts Fox News Channel’s early evening talk show named Political Commentary. He had attended and graduated from Queen of All Saints Basilica and after that, he had attended a high school named Rollins College. He is a Catholic. There is no any information regarding his father and mother.

Eric Thomas Bolling was born on March 2, 1963, in Chicago, Illinois, the US to Marie Hildegarde (Catino) and John Gustav Bolling.

He is of mixed ethnicity as his father is Swedish and mother is Italian. He was raised in a poor family and he lost his sister because of cancer.

Eric joined the Queen of All Saints Basilica School and completed his grade schooling and later he attends the Loyola Academy for high school.

In 1984, Bolling completed his graduation with a BA degree in economics from the Rollins College in Winter Park, Florida. Then he received a fellowship to the School of Public Policy of to Duke University.

Eric Bolling began his career as a commodities trader on the New York Mercantile Exchange. He served nearly five years at the NYMEX and became a strategic adviser to the exchange's board of directors.

During the time period of 2005 to 2006, he was included in Trader Monthly's Top 100. He was awarded to Maybach Man of the Year Award. Bolling was involved in developing CNBC’s Fast Money.

In June 2011, Bolling criticized former President Barack Obama for allowing rapper Common to appear in the White House. He also served as a co-host of The Five on the Fox News Channel.

On August 4, 2017, Eric was charged with an allegation for sending unsolicited lewd text messages and lewd photos to three female colleagues at Fox News or Fox Business Network.

Because of his inappropriate behavior, he was suspended from the channel with pending the outcome of an investigation.

Eric is a married man, he ties a knot with Adrienne Bolling. The duo exchange a vow at an intimate ceremony. They had a son, Eric Chase Bolling who was born in 1998.

On September 9, 2017, Eric son was found dead just after the Fox announcement of Bolling leaving the network. Police suspect Eric Chase death as possibly from suicide but the actual report has yet to come.

"Adrienne and I are devastated by the loss of our beloved son Eric Chase last night. Details still unclear. Thoughts, prayers appreciated."

Authorities have informed us there is no sign of self-harm at this point. The autopsy will be next week. Please respect our grieving period.

Eric has an annual salary of about $10 million and his net worth is around $15 million.

He has married to a beautiful lady named Adrienne Bolling. The couple is living very happy life. He loves his wife very much.

He is very adorable and handsome one. He is in his teens and attends college.