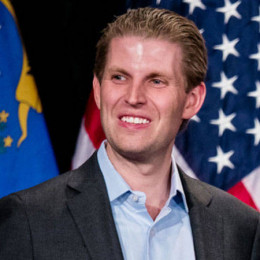 American businessman, Eric Trump is the third child and second son of the President of the United States, Donald Trump, and Ivana Trump, a Czech-American businesswoman, author as well as a socialite, and former fashion model. He is the executive vice president, development, and acquisitions of 'The Trump Organization'. He directs all new project acquisition and development throughout the world, with his brother, Donald, Jr. Eric graduated with a degree in finance and management from Georgetown University in Washington, D.C.

Eric Trump married Lara Lea Yunaska, an associate producer at the syndicated television news program 'Inside Edition.' The couple is together since 8th November 2014, they got married at Mar-a-Lago Club in Palm Beach, Florida. In 2013, Trump has won 'Wine Enthusiast Magazine's "Rising Star of the Year" award. In 2006, he founded the Eric Trump Foundation, which raises money for St. Jude Children's Research Hospital. He is the owner of Trump Winery too.

Eric Trump married with Lara Lea Yunaska, an associate producer at the syndicated television news program 'Inside Edition' The couple are together since 8th November 2014