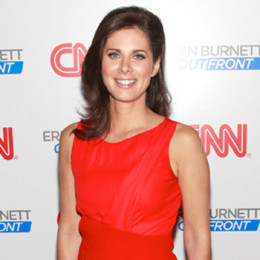 Erin Isabelle Burnett is an anchor of her own news show on CNN, Erin Burnett OutFront. Besides, she has also appeared on NBC Nightly News, MSNBC's Morning Joe; NBC's Meet the Press, Today. She is a member of the Council on Foreign Relations. In 1998, she graduated with a Bachelor's degree in Political Economy from Williams College in Williamstown, Massachusetts. She was born to Esther Margaret and Kenneth King Burnett, a corporate attorney.

Talking about her current relationship status, she is a married woman. Since 2012, she has been enjoying her marital relationship with her husband, who is said to be the managing director at Citigroup. The couple has raised a son and a daughter from their marriage. The two are happy and satisfied being the partner of one another so they probably aren't thinking of getting divorce at the moment. We can stay connected to her via Twitter @/erinburnett.

He is the one and only husband of Burnett, who currently serves as a finance executive and the managing director of Citigroup. The two first met on a blind date in 2003.

He is the only son of Burnett, whom she gave birth at the age of 37.

She is the only daughter and youngest member in the family.