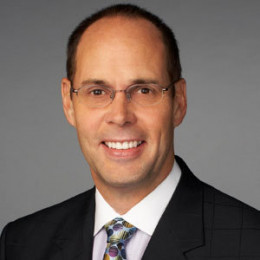 Very handsome and a prominent journalist, Ernie Johnson Jr is a sportscaster for Turner Sports and CBS Sports. Johnson's career began in 1977 while he was still a student at the University of Georgia when he took a job as the news and sports director for the radio station WAGQ-FM. He was co-winner of the Sports Emmy for Outstanding Sports Personality, Studio Host, tying with Bob Costas of NBC and HBO. He is currently the lead television voice for Major League Baseball on TBS.

He has been married to his wife for more than three decades. Johnson and his wife, a licensed professional counselor, live in Braselton, Georgia and have two biological children and four adopted children. A Christian since 1999, he works on a regular basis with the Fellowship of Christian Athletes. In 2003, Johnson was diagnosed with non-Hodgkin's lymphoma but continued his work through June 2006.

Ernie was born on August 7, 1956, in the state of Wisconsin. His parents are Ernie Johnson Sr. and Lois Denhard. His father was a pitcher in the Major League Baseball. He graduated with a degree in Journalism in 1978.

Ernie began his broadcasting career while he was at the University of Georgia. He was the sports director for a radio station in Athens, Georgia in 1977. He later became a sports anchor in 1983. He joined the Turner sports channel in 1989.

Johnson's major career breakthrough came in 1990 when he was hired by TNT to cover the NBA events, including the pre-shows, halftime and the post-programs. He is currently a sportscaster for Turner Sports and CBS Sports.

Ernie Johnson is married to his wife Cheryl Johnson since 1982. The longtime couple has settled into what Johnson regularly refers to as a "wonderful life". Cheryl works as a licensed counselor and the two have found a way to balance the demands of both of their careers over the last three and a half decades.

Johnson is quick to credit his family for his success and longevity in the field. He said:

"It all just works. It’s truly a team effort. There’s no way we would have ever have done it without our entire family unit just pulling on the rope. If anybody had their own agenda getting in the way, it just wouldn’t work. We are blessed to have this incredible team of just caring kids and we’ve found a way."

Cheryl now serves as the founder and brand ambassador of Street Grace, a non-profit that’s fighting the sex-trafficking trade around the world.

The couple shares two biological children together, Eric Johnson and Maggie Johnson. In addition, they have four adopted children named Michael Johnson (from Romania), Carmen Johnson (from Paraguay), plus Ashley Johnson and Allison Johnson, both adopted domestically through foster care.

The couple tied the knot many years ago. It is due to their love and support, they have been able to sustain this relationship so much longer.

He is the only biological son to this family.

The couple were blessed with this beautiful daughter.

He is the son adopted from Romania.

Then the couple adopted a daughter from Paraguay.

She was domestically adopted through foster care.

She is also a daughter to be adopted domestically through foster care.