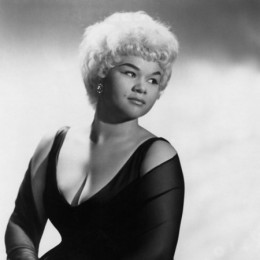 An American singer who released the popular hits like "Something's Got a Hold on Me" and "At Last" and has won multiple awards, like Best Traditional Blues Album. She was born to single mother Dorothy Hawkins who was just 14 years old when she gave birth to her. In 1950 she was discovered by Johnny Otis. She started her career in music in 1954 with the release of "At Last", "Tell Mama","The Wallflower" and so on. She also recorded in collaboration with the Muscle Shoals house band in the Fame studios. During her career she received six Grammy Awards. In 1993 she was inducted into the Rock And Roll Hall Of Fame. She died at the age of 74 due to leukemia.

She faced many personal problems including drug addiction for which she was sent to rehabilitation center and prison too. Talking about her personal life, she was once married. In 1969, both of the couple was arrested for heroin possession and after her husband took the responsibility, he served a 10-year prison sentence. He still remained her husband when she died in 2012. She had brief relationship with a man who was also using drugs whose name remained mystery with her. She gave birth to two children from her marriage.

Together they were parents of two sons. He faced 10 years imprisonment after he was found in possession of drug along with Etta.

He is the eldest son of the family. He is professional drummer.

In 2003 he played bass guitar circa while performing alongside his mother.