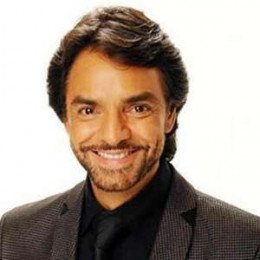 Eugenio Derbez is a famous, talented and handsome Mexican Television actor who played various Girl in Progress, Jack and Jill, Under the Same Moon. Besides acting he is also a director. He is the son of publicist Eugenio González Salas (Father) and actress Silvia Derbez (Mother). He has interest in acting from his childhood and made a television debut at the age of 12. He starred in the 2013 action comedy film Aztec Warrior. He also starred in many American movies. His first movie was Juju de Mexico.

He is a married person. He was first in marital relationship in 1990s with a girl who is a Mexican actress notable for her roles in telenovelas.and they divorced after five years of their relationship. Recently in 2012 he was married to another mexican actress and singer. He always choose the girls from the same field of profession. Now he is happily married and we can hope that this relationship will last longer till their death,

He was married to Mexican actress Victoria Ruffo in 1992 and they divorced in 1997.She is a famous actress.

He married to Alessandra Rosaldo actress, singer and dancer from Mexico .The couple married in 2012.There couple are happy with each other.

Aislinn Derbez Michel is his first child.She was born in March 18, 1986.

Aitana Derbez is a daughter of Alessandra Rosaldo.