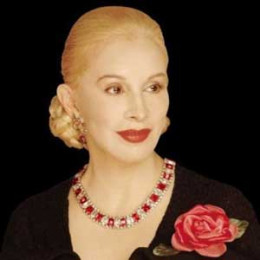 Eva Peron was from a poor family and later became the first lady of Argentina. She was the second wife of Argentine President Juan Peron(1895-1974). Inspired by her life, Tim Rice and Andrew Lloyd Webber launched a musical named, Evita which in 1996 was made into a movie starring Madonna.

Eva was raised by a single mother as her father died in a car accident. Her parents were never married but had four children. Despite that, her mother, Juana used the last name, Duarte for herself and also on her children.

Eva, to pursue her career in acting, moved to Buenos Aires when she was 15 years old. She made debut in the movie industry with the movie Segundos Afuera, directed by Israel Chas de Cruz and Alberto Etchebehere. After that, she got a contract to perform on radio.

Eva established her entertainment company named, Company of the Theater of the Air that produced radio programs. One of the biggest success of her life came in 1943, as she got a chance to portray famous women in history likeQueen Elizabeth I and Catherine the Great in a radio series.

Eva Peron married Juan Peron in 1945 and was the second wife. The couple met at the fundraiser's gala at Luna Park Stadium. The fundraising was for the earthquake victim of San Juan, Argentina where more than 10,000 people died.

Her life changed drastically after marrying him as her husband became the president of she utilized the power to improve the condition of poor and to reduce the suffering of women. She also started the trend of voting for the women and helped the poor Argentines to uplift their life standard.

Moreover, she also ran a personal health and labor ministries. Due to her incredible work, she was praised as the first lady of Argentina and was asked to be a Vice-President along with her husband.

Eva had cervical cancer. She died on 26th July 1952. Her dead body was buried under a fake name in Milan.

Later on, her husband along with her husband's third wife took the body and stored it in their house. They combed her hair and cleaned the body time to time. At last Eva was buried in her maiden family's tomb in a secure, tamper-proof spot in a cemetery in Buenos Aires.

Eva Peron married Juan Peron, the former president of Argentina in 1945. The couple had no children.