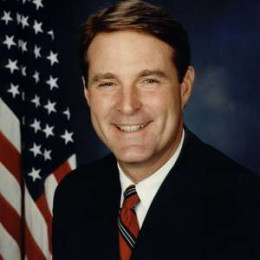 Birch Evans Bayh III or simply Evan Bayh is a lawyer and democratic politician of America. He is former junior U.S Senator. His mother is Mahervella Bella while his father is Birch Bayh, who is once the U.S Senator. Evan joined the public office as the Secreatey of State of Indiana in 1986 and after working for two years he was elected for the Governor of Indiana in 1989. He served as the Governor till 1997. In 1999, he was elected the U.S. Senator from Indiana and served two terms till 2011. In the early 2010, Evan announced that he will no longer nominate for the 2010 senate and was replaced by Dan Coats.

Evan Bayh is married to Susan Breshears and has twin sons, his wife works in a number corporate boards mainly for health insurance. She is also the corporate director at Anthem. The couple shares a good chemistry and there is no sign of divorce till date. After he left the U.S senate Evan works for healthcare and financial service firms partnering with McGuireWoods and served as the senior advisor for Apollo Global Management. He is loved and admired by the citizens of Indiana.

She is the democratic politician .She is famous in Indiana as a director too.She is good politician.

He is the first son of Evan Bayh .He is born of twins.

He is the second child of Evan and Susan .He has his big brother ,they are twins.