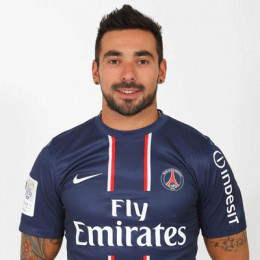 He is an Argentine professional football player who is currently playing for the French club side Paris Saint-Germain and is also playing in the Argentina national team as a forward or winger wearing jersey number 22. He is known for his speed, style and skillful dribbling. He started his youth career at Rosario Central and made his professional debut from the club Estudiantes (BA) in 2003 after 8 years of training in his youth club.

He is married to his girlfriend whom he loves very much. He has a child from this marriage. There is no any record of his previous affairs or association with any woman. There are no rumors available regarding his personal life. He has been faithful to his wife till date. The couple is living very happily together. He is rumored about this transfer during the transfer seasons.

She was his girlfriend and now his wife and mother to his son. They love each other vey much and are living happily.

He is very young now and is very cute. He is loved and adored by both his parents.