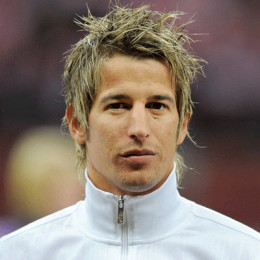 Fabio Alexandre da Silva Coentra is a Portuguese professional soccer player. He plays for Spanish club named real Madrid and also for Portugal national team. He mainly plays as a left back and sometimes he plays as a left winger and also as a defensive midfielder. His mother used to work in a fish factory. He had started his professional career in football in 2004 with Rio Ave F.C.

Coentrao is living a blissful married life with his wife Andreia Santos in 2010.

The pair has a son named Henrique Coentrao and a daughter Victoria Coentrao.

Fabio has an estimated net worth of about $10 million as of 2019. He terminated his contract with Real Madrid in September with a year left because he mentioned that he wanted to be happy.

In 2007 he had represented his nation in 2007 FIFA U-20 World Cup. Due to lack of opportunities at football club Benfica he late on joined Madeira in 2008. There he scored twice and his team won the game against team F.C Porto by 3-0. Among every season he had played up to now season 2010 and 2011 are the best.

He is married to his long time Portuguese girlfriend Andreia Santos. Before marrying his girlfriend got pregnant and when they got married Andreia was seven months pregnant.

He has a child from his wife. Her name is Victoria Coentrao. There are no other information about his child more.