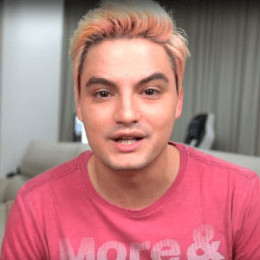 Brazilian actor and manager, Felipe Neto is also a You Tuber. In 2012, he became the first Brazilian YouTuber to have over millions of subscribers. He is the founder of Paramaker Network. Neto also appeared in several movies, web series and theater plays. At present, Neto is dating his You Tuber girlfriend, Bruna Gomes. They started dating in 2017.

Felipe Neto was born Felipe Neto Rodriguez Vieira on 21st January 1988 in Rio de Janeiro, Brazil under the birth sign Aquarius. Neto is Brazilian as per nationality and ethnicity wise he's Portuguese Brazilian. He grew up along with his brother, Lucas Neto (a You Tuber). During his teens, he took theater classes.

When he was 13, he started working in a store. The following year, he started his business of ‘’telemensagem’’ which later ended due to the incompetence of the clients.

In 2003, Felipe Neto debuted in theater play from A Midsummer Night’s Dream. Neto worked in a web series, Felipe Neto in 2010. The same year he appeared in an ad of Wise Up Teens.

Neto later appeared in several web series, Nao Faz Sentido!, A Toca, YouTube FanFest Brasil and A Origem and Animento among others. In 2012, he made big screen debut from the movie Totalmente Incoentes.

Neto has self-titled YouTube channel. He uploaded his first video on 19th April 2010, RIARIARIARIAR which has over 1.9 million views. He has uploaded over 500 videos on his channel.

In 2012, he became the first Brazilian You Tuber to collect over millions of subscribers. As of February 2018, the channel has over 19 million subscribers.

Neto is the founder of Paramaker Network, a business network inside of YouTube. Subsequently, he signed a partnership with Maker Studio. In 2015, he sold the control of the company to French media company, Webedia. Currently, he is the creative nucleus of the company.

Felipe Neto has an estimated net worth not less than a million as per some online sources, but the exact amount is not made public. Neto earns $578.2k- $9.3 million yearly from his YouTube channel. He also earns a good amount from his published books-

Felipe Neto is yet to get married. Neto is currently dating his You Tuber girlfriend, Bruna Gomes. They started dating in 2017. The couple often posts pictures together on their social media.