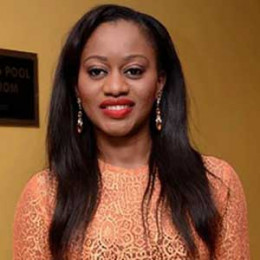 Femi Oke is television presenter and journalist currently working for Al Jazeera English. She is an international broadcaster. Oke is also an active public speaker who has spoken as a guest lecturer in universities and prestigious organizations.

Femi Oke is the British Nigerian Television Presenter and Journalist, born on June 30, 1966, in London England to Nigerian parents. She belongs to Yoruba ethnic group.

She completed her high school education in the United Kingdom. She graduated from Birmingham University with bachelor's degree in English literature and language.

Femi started her broadcasting career at the age of 14, as a junior reporter for LBC radio station. During 1993, Femi worked for a Cable Station called Wire TV, Pre-Janet Street Partner's LIVE TV. She presented shows on the popular Soap On the Wire TV, with soap opera expert Chris Stacey.

In 1990's, she presented the BBC's flagship educational science program Science In Action and also was the presenter of Top of the Pop's. Oke also worked for GMTV, London Weekend Television, Men & Motors and Carlton Television.

Oke is the former anchor for CNN International's World Weather Service at the network's global headquarters in Atlanta Georgia, where she presented weather segments for Your World Today and World News. She also hosted Inside Africa, a program that looks into the economic, social and cultural affairs and trends in Africa.

In 1999, she joined CNN, until 2008, where she appeared as a daily newscaster, contributor, and interviewed on Public Radio International/WYNC's morning Public radio news program, The Takeaway.

Besides, Femi also taught on behalf of the World Meteorological Organization in Buenos Airs, Argentina, as a guest lecturer for the University Liberia, Emory University in Atlanta and a guest speaker at the United Nations, addressing the World Food Programme in Rome, Italy. In 2005, she appeared in Short Film: The Last Hour. Now, she currently works for Al Jazeera English as a presenter.

Fame Ake managed her personal life and professional life in a balanced way. Despite her popularity, she kept informatione regarding her affairs and dating life low profile.

Till now she has not been linked with any guys, and no rumors have yet emerged about Fame's relationship. She is possibly single right now.

Fame Ake has a huge fan following on her Instagram and Twitter account. As of 2017, her net worth is still under review, but we can assume that she earns an excellent amount salary from her work as a Journalist.