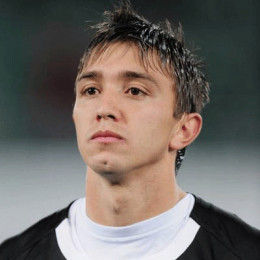 Fernando Muslera is a Uruguayan footballer who plays goalkeeper in his current team Galatasary and his nation Uruguay as well. He plays wIth Jersey No.21.FFHS recognized him as sixth best goalkeeper in the world in 2011 and seventh in 2010. He made his FIFA World Cup debut against France on 11 June 2010, Uruguay's opening game of the tournament and the second game on the opening day of the 2010 FIFA World Cup.

Muslera is seen with his girlfriend Almeda Abazi at various occasions and many photos of them together can be found in the internet. Besides this relationship he is not linked to any other girls and there are no any rumors surrounding him. Currently there are no any rumors about them getting apart. As being the prominent and one of the most recognizable face in the world of sports he has millions of fans with him.