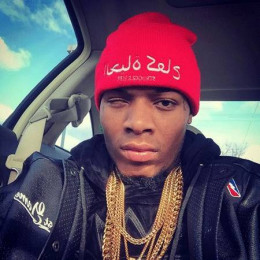 Willie Maxwell commonly known as Fetty Wap is a rapper. He is widely known for his single hit song "Trap Queen", which was included in the United States Billboard Hot 100 at number 2. In November 2014, he signed with 300 Entertainment and also is a part of a group called Remy Boyz. This talented rapper became a part of the XXL Magazine 2015 Freshman Class. He is of Haitian descent.

Moving on to his personal life, he hasn't been married to anyone yet and also does not have any child. There is no record of his past affairs and other such activities. He is currently dating a super hot lady. He was rumored of being shot in his eye but he has clearly stated that during his childhood glaucoma was developed in his both eyes. Doctors couldn't save his left eye so he currently wears an ocular prosthesis.

Fetty Wap was born Willie Maxwell II on June 7, 1991, in Paterson, New Jersey, U.S. He is American and belongs to North American ethnicity. His birth sign is Gemini.

He was born with glaucoma in both of his eyes but after diagnosis doctors were unable to save his left eye and instead replaced with an artificial place through Ocular Prosthesis.

It is believed that his talent was inherited from his mother. He completed his schooling at the Eastside High School in New Jersey.

His first name, Fetty was taken from his nickname which means making money and Wap was added to the tribute to  Gucci Mane's alias, GuWop.

Fetty Wap made his professional singing debut in 2014 with his single, Trap Queen which becomes a platinum record and has over 130 million plays on SoundCloud.

The success of his track helped him to fetch a deal with the record label ‘300 Entertainment’. In May 2015, he uploaded his second single, ‘679’ on YouTube, after a month the song was commercially released to the public and succeeds to secure the fourth position in the ‘Hot 100’ countdown.

His next single ‘My Way’ received immense critical acclaim and becomes a ‘Billboard Top 100’ chartbuster which was later remixed by the acclaimed rapper Drake. In September 2015, he launched his first album, 'First Wap' which secured the number one spot on the US ‘Billboard 200’ chart and thousands of copies of this album were sold to the public.

The same year, he collaborates with  American hip-hop artiste, French Montana, for two mixtapes, Coke Zoo and ZOO 16: The Mixtape, which received good reviews from critics and audience. He also collaborates with girl band Fifth Harmony for a single titled, All in my head.

In 2015, he bagged three awards, ‘MC100 Award’, ‘MTV Video Music Award’ and ‘BET Hip Hop Award’ for his hit single ‘Trap Queen’. Besides this, he also earned two nominations for Grammy Awards. He gets 10 nominations during the 2016 ‘Billboard Music Awards’ ceremony out of which 4 are for Trap Queen.