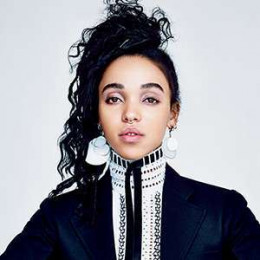 Tahliah Debrett Barnett, known by her stage name FKA Twigs is an English singer, songwriter, record producer, director, and dancer. Born to a Jamaican father, and her English mother, who is of part Spanish descent. Barnett was raised by her mother, dancer and gymnast, and stepfather. She did not meet her biological father, a jazz dancer until she was 18.

At the age of 16, Barnett started making music in youth clubs and later moved to London to pursue a career as a dancer. She worked as a backup dancer in a music video by artists such as Kylie Minogue, Plan B, Ed Sheeran, Taio Cruz, and Jessie J.

When Twigs was 18, she began working with local London producers to try to find “her sound”. Around the time she wrote, “I’m Your Doll”. She ended up producing a lot of what she calls “ really bad demos.” Alongside her music career Twigs gas directed or co-directed most of her videos. In August 2014, she was signed to London-based production company Academy Films as part of their A+ roster. She has since directed videos for “Pendulum”, “Glass & Patron”, “M3LL155X” as well as the forthcoming Soundtrack 7 dance films.

In April 2015, it was confirmed that Twigs is engaged to actor and musician Robert Pattinson. The pair started dating in September 2014. The couple announced their engagement just after six months into their relationship but then hastily postponed their plans to walk down the aisle.

Rob and Tahiliah have no plan to marry soon and they are happy as they are. They’ve made a commitment to each other and they don’t feel the mess to get caught up in all the stress and drama of planning a wedding right now - they’d rather just have fun and enjoy being together.