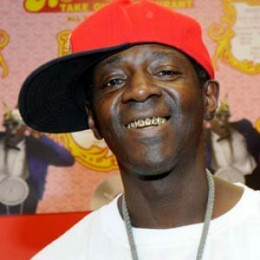 Willian Jonathan Drayton Jr. is known better by his stage name Flavor Flav and is a television personality, rapper, musician and comedian. Flav came to prominence as a founding member and hype man of the rap group Public Enemy from which he got a great fame and attention. After a hiatus from the music scene, Flavor Flav was invited to participate on VH1 reality show The Surreal Life. He graduated from the culinary school on 1978 and was enrolled also in the Adelphi University. By the time he dropped out of school in the 11th grade, Flav had been in and out of jail for robbery and burglary.

His marital life is not as successful as his career. Throughout his life, he has been in a relationship with many beautiful girls but none of them tied the knot of marriage. He has about seven children from different relationships. He had his first three children with Karen Ross, and three with Angie Parker.

She is the first daughter to this couple.

He is the first son to this couple.

She was welcomed as a third child to this family.

She is the first daughter to this relationship.

The couple were blessed with this beautiful daughter as second child.

The couple were blessed with this beautiful daughter as third child.

He has a child named Karma from his fiancťe Liz Trujillo.