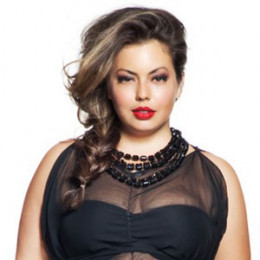 Fluvia Lacerda was born on 31st July 1980, in Rio de Janeiro, Brazil and lived in Boa Vista till she was sixteen years old.

After that, she moved to the USA to study English, but due to the financial problems of her family, she had to work as a nanny and cleaning lady.

Fluvia Lacerda began her modeling career as Plus Size Model in 2003 after being discovered while riding a bus in New York.

She is one of the most popular and sexiest plus size models not only in Brazil but throughout the rest of the world. Over the years, her fan following has increased more and more.

Fluvia worked as the face of brands including Mar & Nua, Kmart, Torrid, Fashion Bug, and Igigi. Moreover, she has also featured in magazines such as Beautiful and Vogue Italy.She has done photo shoots in different countries including, Canada, Spain, Germany, France, Australia, England, Brazil, and Jamaica.

She was also recognized as the Model Plus Size of the year in 2011, during Fill Figured Fashion Week which was an event designed by Gwen DeVoe in 2008 and held at the Metropolitan in New York. Lacerda also featured on the cover of Playboy Brasil and was the first plus size model to do that.

Fluvia Lacerda was married Wallace Andrade de Araujo. The couple married in a blissful wedding ceremony. But they divorced in 2013. She has two children, a daughter Lua Lacerda, born in 2000 and a son Pedro Lacerda, born in 2014. She is possibly single right now as no news or rumors are there about she being in a relationship.

One of the most successful plus size model Fluvia has not yet disclosed her net worth to the media. But by looking at her career in modeling, she must probably be earning a good salary. Apart from that she also has her own lingerie label and plus she also featured in Playboy.

Fluvia Lacerda married Wallace Andrade de Araujo. The couple married with a blissful wedding ceremony. But they divorced in 2013.

The couple is blessed with a daughter named Lua Lacerda was born in 2000 .

Their son named Pedro Lacerda was born in 2014.