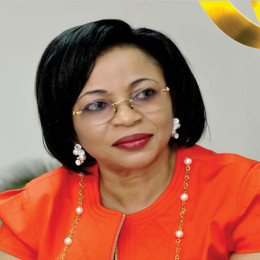 A Nigerian businesswoman who is better known as the third richest woman of African descent in the world. She is involved mainly in fashion business. When she was seven years old, she moved to United Kingdom and attended Dinorben School for Girls in Wales. She studied fashion design at the American College, London. In 1974, she started her career as an executive secretary at Sijuade Enterprises in Nigeria. After working some year in FinBank, she established her own tailoring company named Supreme Stitches. Within a year it started gaining popularity and it was renamed as Rose of Sharon House of Fashion. She also holds a license to explore for oil in Nigeria. In 2014 Forbes listed her as 96th most powerful woman in the world. Her current net worth is estimated to be $2.1 billion.

Talking about her personal life, she is a married woman. She is married to a lawyer. Couple is maintaining very healthy relationship between them and no complications has arise in their relationship till now. Till now she hasn't faced any kind of divorce. The couple is blessed with four children and grand children. She hasn't mentioned name of her all children. There was rumor that DJ XCLUSIVE was her son but later he cleared that she is her aunt only.

Professionally he is a lawyer. He is father of four sons. Currently the couple resides in Lagos, Nigeria with their four sons.

He is one of the son of the couple. He is father of a baby boy.

He is now grown up and has maintained his image.