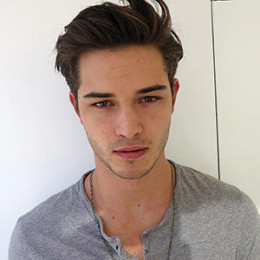 A Brazilian model, Francisco Lachowski, currently married his longtime girlfriend, a French-Canadian model named Jessiann Gravel Beland. The couple married on 3 December 2013. He is the son of Roberto,his father is a Polish descent and his mother Maria is Portuguese and German descent.

Francisco Lachowski is married to his girlfriend, Jessiann Gravel Beland. The duo walked down the aisle in December, 2013. They began kindling romance in early 2011 and took the relationship into next level after  dating for two years.

The couple met in a bar in Japan while shooting for the HUGE Magazine. At that time, Jessian was left wondering "Who's that guy?" when she saw Lachowski walk into the set.

Francisco became pregnant at 24 and for a moment, she though it was the end of her modeling career. But after some advice by her agent, she realized her modeling days are not yet over. Jessiann was photographed in black swimsuit with Elle Quebec in 2013 amid heavily pregnant.

The lovebirds mentioned in an interview that the both do no intend for Milo to follow their modelling footsteps but will fully support him in case that was his choice while getting older.

How Much Is Francisco Lachowski's Net Worth?

Francisco Lachowski has an estimated net worth of $170 million as of mid-2020. Lachowski is paid big bucks for endorsing brands and working as a supermodel of the World, Gucci, Thierry Mugler, Armani, L'Oreal, Robert Cavalli.

The handsome Brazilian supermodel shares a lavish house with his spouse, Jessiann in New York, U.S. He is a founder of Merchandise or an onlinde warddrobe "Tilltomorrow".

Francisco Lachowski was born on May 13, 1991 in Parana, Brazil. He is currently 28 years olf age. He holds Polish-Brazilian descent. His father, Roberto is of Polish roots and mother Maria is of Portugese and German accent. Francisco is not the only child of his parents. He has two siblings, Isabella and Marcela. Chico stands at a height of 6 ft 2 inches.