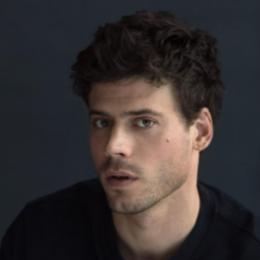 Francois Landriault-Barbeau is a Canadian film and television actor known as Francois Arnaud. He is famous for his role as Cesare Borgia in the drama series 'The Borgias.' Arnaud was featured as Antonin Rimbaud in the critically acclaimed 2009 Cannes Film Festival selection, 'Jai Tue Ma Mere' (I killed My Mother), and won the best supporting artist from the Vancouver Film Critics Circle.

Who is Francois Arnaud's Wife?

Francois is currently single. Arnaud has never been married and he does not have a wife. However, he was allegedly in a romantic relationship with his co-star Sarah Gadon in 2014. Sources claim they have been together for over eight years and four months. 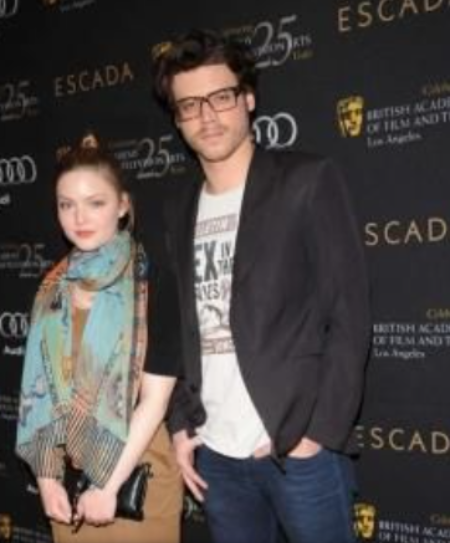 He announced that he was bisexual through his Instagram account in September 2020. The actor mostly spends quality time with fur babies. Francois has not revealed his relationship status in public. 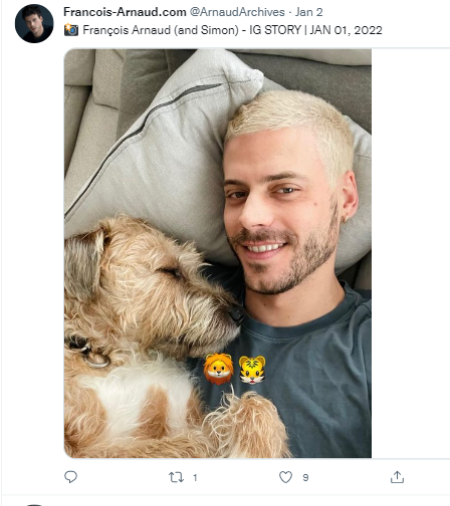 He has dated numerous women. He was in a romantic relationship with actress Evelyne Brochu (2012-2014). Arnaud also dated Holliday Grainger (2011 to 2012) and Sarah Gadon in 2014. Midst Francois's affair with Holliday Grainger made several red carpet appearances together.

Francois Arnaud has an incredible net worth of $3 million as of 2020. His source of income is his acting career. He receives a paycheck of around $55,880 annually, the basic salary of an actor in the United States.

He began his career in his home country by landing a part in the comedy series Taxi 0-22. Francois featured Oscar in the NBC drama series "Blindspot". From 2017 to 2018, he played the role of a troubled psychic, Manfred Bernardo, in 'Midnight, Texas.

The show was shot in Albuquerque, and he delighted in scouting the mountains and waterfalls during his stay for five months. He filmed 'Permission' in New York City and filmed sci-fi thriller Origami,' a French-Canadian film shot in his hometown of Montreal. 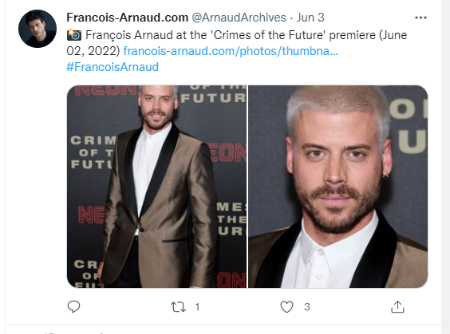 Francois Arnaud attends the premiere of "Crimes of the Future". SOURCE: Twitter

The film Origami was physically and mentally depleting, so Francois couldn't work and took relief in a cabin in the woods. He filmed the Indie film 'She was in Portland with Tommy Dewey in 2017, released in 2020.

He played Sebastien Raine in an episode of the Emmy, and the Golden Globe Award-winning show "Schitt's Creek" as Sebastian Raine, David's ex-boyfriend and photographer.

In 2019, the film 'Rapid Eye Movement' was released, which saw Francois playing a radio DJ whose appraisals are falling, so he plays a stunt by going without rest to break a world record. Francois began shooting a mental thriller called 'Home' about a youthful duo managing an infant. In 2021, he depicted Dan Moody in "The Moodys: until its cancellation.

Francois was born on 5th July 1985 in Montreal, Quebec, Canada. Arnaud always had a keen interest in acting since an early age. Hence, he did first play "Curano" at age nine. Francois was so inspired by the role that he went home and tried to learn the monologues.

Canadian working-class parents raised Francois Arnaud in both Canada and France. Arnaud spent his childhood in Outremont, a borough of Montreal, Quebec, Canada. His father is a lawyer and real estate, developer. He has a younger sister.