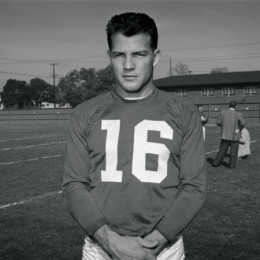 Francis Newton Gifford also known as "Frank Gifford" was an American footballer and Emmy Award-winning sports commentator of ABC's Monday Night Football, for 27 years. In 1956, he received the NFL Most Valuable Player Award and in the same season earned his only NFL Championship. He was born to Lola Mae and Weldon Gifford, an oil driller. He is a 1952 graduate of University of Southern California.

Throughout his life, he was married thrice. At first, he married his college sweetheart with whom he has raised three children: two sons and a daughter. After getting divorce with first wife, he got married to a fitness trainer. His second marriage lasted for almost 8 years. His third marriage was with a television presenter with whom he has raised a son and a daughter. He never filed for divorce with his third wife, it was his death which made them apart.

She is the first wife of Gifford, whom he started dating while attending University of Southern California.

She is the second wife of Gifford, who by profession was a fitness trainer. They enjoyed their marital relation for almost 8 years.

She is the third wife of Gifford, who by profession is a television presenter. They never filed for divorce.

He is one of Gifford's child, who was born healthy. His current status is unknown.

He was born safe and sound. He is now young enough and probably is engaged in some kinds of works which is out of media's radar.

She is one of Gifford's child, who was married to Michael LeMoyne Kennedy and have 3 kids.

He is a footballer and graduate of University of Southern California School of Cinematic Arts.

She is an actress known for The Gallows, God's Not Dead and Adventures of Serial Buddies.