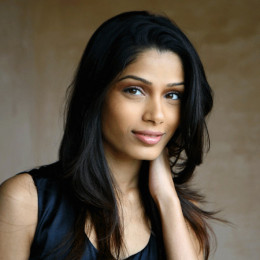 Freida Selena Pinto is an actress and model, who is widely known for playing the leading lady in the British drama film Slumdog Millionaire, for which she received Breakthrough Performance Award and Screen Actors Guild Award. She is the daughter of Frederick, a senior branch manager at the Bank of Baroda and Sylvia, principal of St. John's universal School. She took acting course at "The Barry John's Acting Studio", where she was trained by theatre director Barry John.

Moving on to her personal life, she is yet unmarried and has no child. As it is so obvious, being so pretty and talented she might have received a lot of proposals but as a matter of fact she is currently single. In her past days, she had dated few men with whom she was spotted quite often at various places and events. There is no any controversy related to her personal and professional life.